You know what I did right on my first day in London? I went to Boots and bought some skincare. Why am I only telling you now? Because I only started using it a couple weeks back!

Alright, first off, I needed a new cleansing oil or balm. That’s why I bought it. Also, there has been significant hype around this product from several German bloggers. Also also, this 200ml bottle is only 11£! Amazing!

I’ve been using the cleansing oil every night for over 3 weeks now, and let me tell you, it is amazing. It removes all of my makeup, no problem, and leaves my skin feeling good. Yes, there is some residue if you only wash it off with water, but I don’t mind that since, in the evenings, I use a more aggressive second cleanser. Then there is the heavenly smell. Slightly citrusy but not too zesty as to be irritating, it really helps in calming me down before bedtime. If you are sensitive to smell, then maybe this is not the right cleansing oil for you.

Another insane thing, besides the price, is that I have barely used any. You don’t need many drops to cleanse your face. If I only wore a bit of makeup, 4-5 drops are more than enough. And the bottle itself is pretty well designed too. It’s sturdy and has a good cap that you can open and close easily with just one hand (in case you already have product dispensed in the other hand).

I picked this day cream up for three reasons: it has SPF, it’s cheap and it’s pretty good ingredients wise. (Small tip: this is a Boots brand, so they constantly have amazing deals on Botanics products) It smells very nice, not too distinctly like flowers or anything, but just a nice pleasant cream scent.

Hydration wise, I’d say it’s pretty good. It also does not seem to leave a white cast, the way many sunscreens do. But if it starts to get really cold, I’ll likely have to layer some oil under this, to prevent my skin from drying out.

This little bottle ended up in my shopping cart because it was standing right next to the All Bright Hydrating Day Cream and it sounded good.

Now I’ve not really used the serum, mainly because for the first week that I’ve used it, it either did nothing or broke me out horribly (the jury is still out on that). So it’s been mostly languishing on my shelf. But with the colder weather, I am slowly using it. Here is hoping that it won’t do any damage! 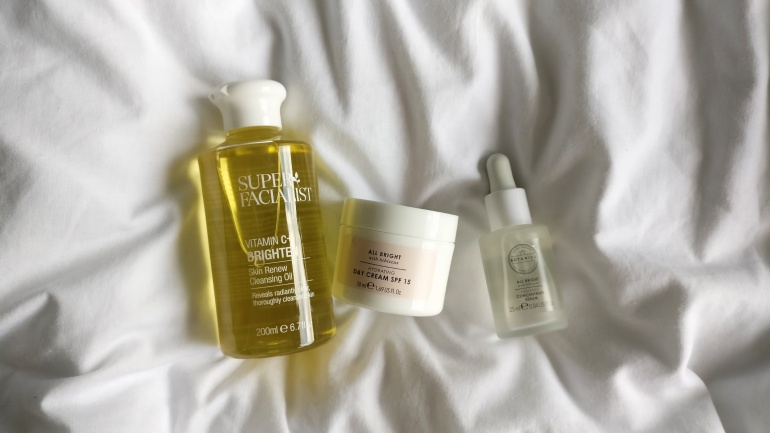 Begin typing your search term above and press enter to search. Press ESC to cancel.

Any cookies that may not be particularly necessary for the website to function and is used specifically to collect user personal data via analytics, ads, other embedded contents are termed as non-necessary cookies. It is mandatory to procure user consent prior to running these cookies on your website.